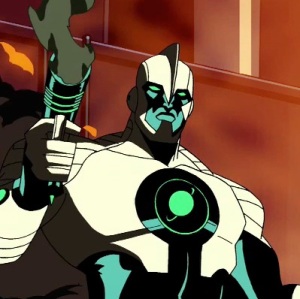 The aliens invade in the episode of Avengers that introduces us to the Kree and their ancient foes, the Skrulls, as well as Captain Marvel and a future member of the Avengers. It’s also a nice spotlight on Ant-Man, Wasp, and their budding relationship.

Declarations and “Parrot Syndrome”: One issue with the flow of tabletop play is what we might call “Parrot Syndrome”—the GM spouts off some information a character should know by virtue of skill level or a successful action (noticing or figuring out something) and all the player can really do is parrot-back what the GM just said or go with the even shorter “Yeah, that” or “I tell everyone that, essentially.” It tends to pull the role out of the player’s hands, at least for that bit of exposition. It also makes it difficult for characters to withhold or “filter” information, since everyone hears what the GM has to say.

One way of dealing with this is to prepare some information in advance, perhaps on notecards or the like, which the GM can simply hand to the appropriate player as that information is uncovered. This is particularly effective in games where an established “chain” of information is planned and expected.

Other games deal with it by allowing and encouraging players to fill-in certain details on their own. That is, with a successful action, the player can simply declare something and make it a fact. This requires a lot more improvisation from both the players and the GM, and can take the plot in unexpected directions. To use this episode as an example, imagine Ant-Man’s player simply declared there was no sign of organic matter in the scans. The GM, thinking quickly, decided rather than a Kree ship or expeditionary force, the incoming object was actually a robot.

Love & Fear: Lots of systems have various ways to deal with how characters feel in the context of the game, too, from things like “fear checks” with mechanical effects to loves and hates as in-game abilities used for actions as much as other games use Strength or Intelligence. Character motivations matter a lot in this episode: from Wasp and Ant-Man’s feelings for each other to fears of the Sentry and the Kree to Captain Marvel’s sympathy for humanity and willingness to betray his own people to save Earth from devastation. To what degree are these motivations left up to the players to portray and to what degree does the game system offer “rewards” (or even “requirements”) for portraying them?

Next Up: Widow’s Sting