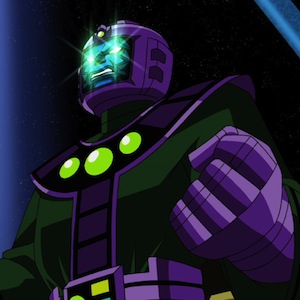 “The Man Who Stole Tomorrow”

So, I’ve got to admit: I didn’t “get” Kang the Conqueror at one time. When I started reading comics (around 1979-1980) Kang just didn’t seem all that menacing. It wasn’t until Kurt Busiek’s treatments of him in Avengers and Avengers Forever that I really got the idea of Kang as a foe to be reckoned with and re-read some of his earlier stories and saw him as both noble warrior-general and arrogant conqueror rather than second-rate Doctor Doom. Fortunately, the trilogy of Avengers episodes starting here taps into the Kang I “got” as well as his original comic book appearances to make him a foe worthy of Earth’s Mightiest heroes.

Interludes: Savage Worlds Deluxe has an “interludes” system whereby the GM draws a playing card and its suit determines a type of story a player tells about his or her character as a way of filling in backstory and passing time for things like overland journeys or other pauses between action senses. If the player goes along and does a good job, there’s an in-game reward (a “bennie” or adventure card in SW). Given the tendency of superhero characters to monologue and reminisce, such a mechanic would work well and fit easily into games with “action economies” like M&M and Icons (with hero points and determination, respectively).

Gamemaster Fiat: Sometimes, as a superhero GM, you just need to be able to say: “Here’s what happens,” and have that be the case, such as when Kang timeports the Avengers into the future. It’s doubtful the GM is giving anybody saving throws or whatnot, especially since “success” would effectively take the hero out of the adventure! There needs to be a mechanism for the GM to just declare things outright from time to time, although it can also compensate by rewarding the players in some fashion, such as the complication or challenge mechanics for M&M and Icons.

Team Victory: More than perhaps any other genre, superheroes stress the importance of teamwork: They overcome opposing teams by having it where villains often don’t, and manage to defeat single opponents far more powerful by working together. While many RPGs make nods towards teamwork with certain bonus or things like “combined attacks” it isn’t necessarily those mechanics that win the day (note the Avengers’ effective “combined attack” against Kang when Iron Man says to take him down doesn’t do a thing). Instead, it seems more like the team as a whole accumulates “points” towards their victory, even through the indirect efforts of some members, somewhat like the Challenge system in D&D (also adapted in M&M): although their actual attacks where ineffective, the Avengers keeping Kang occupied contributed as much to their win as Iron Man’s efforts. Indeed, Iron Man’s player might not have been able to “win” unless or until his teammates accumulated a certain amount or degree of success.

Next Up: Come the Conqueror