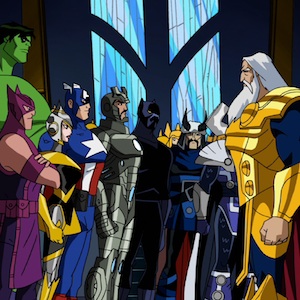 “A Day Unlike Any Other”

This is it: the season finale, featuring the Avengers versus a vastly empowered Loki with the fate of the Nine Worlds hanging in the balance!

Just Shut Up and Be Awesome: It takes a certain suspension of disbelief to handle the superhero genre, with all of its “mad and beautiful” ideas and tendency to toss real-world things like physics and social dynamics out the window whenever they become inconvenient. Might sound like strange advice coming from the guy who spends time analyzing cartoons from an RPG perspective but, don’t over-think things when it comes to superheroes being awesome. In particular, when it comes to your hero, don’t let realistic expectations get in the way of being awesome: just go for it. Be heroic, iconic, and plain over-the-top super.

Be Willing to Wait for Help: Counterpoint to the “just be awesome” observation don’t let your “invincibility” go to your head. In order for the story to have drama, there have to be setbacks and challenges, and there are going to be times when your hero suffers defeat or needs help. Part of the dynamics of a team superhero story is letting different characters take the lead and save the day. A good GM helps to manage this somewhat, but good players also don’t hog the spotlight and even look for opportunities for their teammate to shine and help them to get there. It’s even possible for turn-order and the like in an RPG to encourage this kind of thing.

Be Open to Opportunities: One of the best things about a live RPG is you don’t really know what’s going to happen. It’s being creative on-your-feet and in the moment for both the GM and the players and, when all cylinders are firing and inspiration strikes, it can be pretty amazing. Be open to those moments and don’t get overly attached to the way things “should” go. By all means stay within the spirit of the game and the genre, but a good game will provide players with opportunities to get creative, even some situations that require it.

“Leaders Lead”: Leadership and teamwork are big elements of the superhero genre; charismatic leaders barking “Maneuver 7!” or “Fastball Special!” and hero teams overcoming more powerful foes by becoming greater than the sum of the individual members should be encouraged and rewarded in the context of the system. There’s definitely a roleplaying element here, and players inclined to play leader-types should do so, and players should look for opportunities to work as a team, but it’s helpful if the system rewards such behavior in order to encourage it.

“Invincible” is Relative: In the comic book genre in particular, anything is possible: supposedly “unbreakable” metals get broken, foolproof countermeasures are overcome, etc. The trick is to ensure this doesn’t happen so often that those categories become meaningless. It’s no fun having an impervious shield if every bad-guy gets to show how macho he is by breaking it, nor is it fun to be the greatest whatever in the world and have every guest star show you up by having equal or greater skill. While “absolutes” in the genre rarely ever are, exceptions should be for emphasis, to underline their rarity, rather than to render them pointless.

Tipping Points: This episode in particular seems to demonstrate a three-level breakdown in superhero conflicts: lesser, equal, and greater.