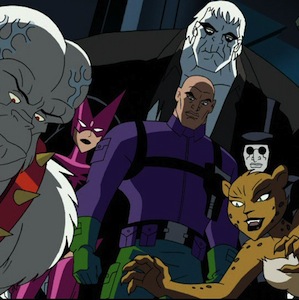 “Injustice for All” is one of my favorite Justice League episodes (along with Season 2’s “Secret Society”) because it has team vs. team dynamics, snappy dialog, and a lot going on, along with a more classic Silver Age Lex Luthor. Plus a terrific use of Batman and his abilities, which we’ll look more at in Part 2.

Thanks to Martian Manhunter impersonating Superman, the League finally gets the goods on Lex Luthor. Luthor hops into a high-tech flier, firing blasts to cover his action, then uses a missile to bring down the roof, all before Batman, Green Lantern, or Martian Manhunter can move to stop him. Given the eagerness of most players to act, this looks like some type of fiat on the part of the GM, creating a complication for the heroes.

Luthor takes off, with Superman in pursuit. A missile hits Superman, momentarily stunning him. A good damage roll or failed resistance on Supe’s part? In game terms, may be possible to stun someone without actually “damaging” them, which seems to be the case with a lot of Superman’s invulnerability in the series: he gets knocked around a lot without any more serious effects. The “Newton’s Revenge” option for Icons takes a similar approach.

Luthor and the Ultra-Humanite escaping from prison is all GM fiat and omniscient point of view—in game terms, it might all happen “off-camera” unless something unusual, like players taking the roles of villains in some scenes, is happening. In an RPG, we might cut away from Superman’s meeting with Luthor in the prison hospital to Batman getting the emergency call sometime later.

Batman finds the trapped little girl in the building fire: “I’m scared,” she says. “Don’t be, it’s going to be all right.” Just roleplaying here or perhaps a mechanic for getting some hero points? Given that Bats gets cornered by the fire and caught in a collapse moments later, it sounds like building up challenges. Hawkgirl’s last moment rescue could be a use of in-game resources (e.g. hero points) or just a story opportunity provided by the GM. Batman does call in backup before going into the building, after all.

Might be interesting if the whole exchange were part of some mechanic for “trading” resources, such as, “You help my character out of a jam and, as a reward, you get the resource I would have earned from that challenge” or the like. A way of encouraging and building teamwork?

The big fight between the League and the Injustice Gang offers us a lot to consider, such as:

Batman seriously racks up challenges, setbacks, and personal subplots: stunned by Luthor, poisoned by Copperhead, facing his own mortality aboard the Watchtower, and going solo to track down the Injustice Gang and prove he’s got what it takes, plus his unexpected enemy subplot when the Joker shows up to play.

Catching Batman off-guard, Joker is able to KO him with one attack (or, perhaps just damage him and knock him off the balcony, letting the fall do the rest of the work). Good thing Bats has run into all these problems, he’s  going to need his hoard of resources in the next episode…

Fluid and Narrative Time: While stories like animated series episodes or comic books tend to take a fairly linear approach (perhaps with the occasional flashback), RPGs may have a more fluid handling of time and causation. That is, some things that appear linear in narrative might not be from a game mechanic standpoint.

Take the rescue scene in the burning building in this episode: although we see Batman call in League back-up before going in, in game-play this could have been a retcon (to use the Icons term) or some other mechanic whereby Batman’s player, realizing he’s in over his head, can do something to make it so that Batman did call in back-up, even though that wasn’t initially specified (we’ll see a similar example in “Secret Society”). This might be a general capability for players, or something specific to Batman and his ability as a master-planner, or a measure of both: something all characters can do, but Batman does better or more often.

Either way, it’s important to note that the narrative of an RPG often emerges after the fact rather than during the game, when it is still fluid and subject to “editing” by the players and GM.

Differing Scales: Although superhero RPGs often focus on the grand scale of superhumans, in practice there isn’t a lot of difference between Superman, a hulking Solomon Grundy, and a mutant ape. While it’s doubtful you’d see the Ultra-Humanite pick up a train, he can still wrestle Superman. The really high-end of the power scale is, practically, fairly compressed into just a few relevant ranks or levels. This is often why RPGs have log scales like in M&M 3e: a couple ranks difference may translate into 2–4 times the narrative difference, but a much smaller game-effect; 5 ranks of effect are needed in M&M to equal an automatic degree of difference, but that’s the equivalent of 32 times in raw measurements! Superman might be 32–100 or more times “stronger” but that does not put his weaker opponent out of the running. Similarly, games like Icons and Marvel Heroic compress the superhuman into a relatively narrow range (levels 7–10 for Icons and the d8, d10, d12 ratings for Marvel).

Next Up: Batman psychs-out the bad guys in “Injustice for All” — Part 2