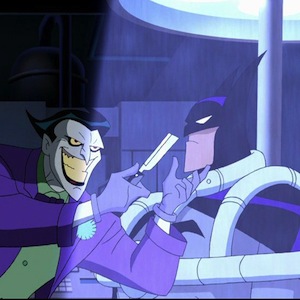 So now that Luthor’s Injustice Gang has caught Batman, what are they going to do with him? Note that Batman is intimidating to most of the villains in the room while chained up and not even trying! That’s some “passive” intimidation score!

Batman’s utility belt has defenses built-in! When Grundy tries to open it, he gets shocked almost unconscious. Is this something that “costs” Batman’s player in some fashion because, seriously, who thinks to build one’s utility belt like that in advance and actually spends game system points/resources on it? In system terms, Batman is still “opposing” attempts to get into his utility belt and use his resources against the League, even though he isn’t able to actively do so. That’s why it takes a genius like Luthor to get it open.

Batman then exerts his considerable presence and skill to influence the Injustice Gang members: figuring out Ultra-Humanite and Cheetah’s motivations and manipulating them.

Conversely, in spite of his considerable strength of will and personality, Superman’s just not that intimidating and can’t get Copperhead to talk. Could it be the Big Blue Boy Scout’s reputation for morality hindering him, as Copperhead indicates? An effect of his known motives?

Batman’s utility belt is bigger on the inside than on the outside! At least, that’s how it looks, considering what it contains, once it’s dumped out. One can’t help but wonder if Justice League Batman has some kind of matter-compression field for storing stuff in his belt, the unspoken assumption that Justice League Batman is really a sci-fi character, as opposed to “a mere mortal in a Halloween costume” (as Luthor once called him).

Finding the bomb hidden on-board the Watchtower is clearly a team effort, perhaps some kind of combined test, accumulating sufficient successes to locate it, such that when the threshold is reached, someone (in this case, GL) finds it. It’s interesting to note that characters who could potentially search the entire Watchtower (e.g., Flash and Superman) do not do so. It’s a team thing. Also, the warning that the League gets about the bomb ultimately comes from Batman, so it is a true team effort, involving everyone.

In the big confrontation, Wonder Woman is able to grab Shade’s Nightstick with her lasso, then lasso Joker, hitting Shade a couple times and knocking him down when he tries to retrieve his cane. She loses the upper-hand, however, when Joker stuns her with an exploding kewpie doll. There are at least several actions on Diana’s part with one each from the villains, possibly some multi-action or combo for Wonder Woman, or the idea from the previous episode that you can keep taking actions until you lose that advantage in some fashion.

When Superman smashes a statue thrown at him by Solomon Grundy, half of it hits Star Sapphire (allowing Green Lantern the opportunity for the straight line “Duck!” since it’s a statue of a cartoon duck). Is this a maneuver on the part of Superman’s player? Green Lantern’s? It could be Superman’s defense was so effective he got to turn it into an attack on another foe, or he stunted something akin to a Redirect stunt (an extra of Deflect in Mutants & Masterminds).

The twist ending: would Batman and Ultra-Humanite’s “deal” be played-out, handled “off-stage” (perhaps in a sidebar or bluebook), or even ret-conned into existence by spending Determination after some social action or test? One could see a “stunt” or ability that basically says: “Make a social skill test, if it is sufficiently successful, choose one non-player character and declare you have a pre-arranged “deal” with them that causes them to betray their current associates.”

Not All Abilities Are Combat Abilities: Although plenty of fans hate the portrayal of Batman as uber-competent (see Grant Morrison’s Justice League run, for example) this episode is a great example of why a guy like Batman is in the Justice League and what he does there. It highlights how you “win” when you’re not invulnerable and can’t pass through walls or fly. While I wouldn’t go so far as to say Batman lets himself get captured, he does outright say that he could have escaped any time, but chose not to in order to work on defeating the Injustice Gang from within. Ideally, an RPG should be able to replicate this scenario in some fashion and have it be as viable an approach as rolling for initiative and punching the villains out.

Not All Tests Are Active Tests: Similarly, the narrative structure of RPGs versus other stories means that “actions” the players are called upon to perform in terms of game mechanics may not always reflect what is happening in the story right at that very moment. An “action” might be to determine if a character did something in the past, or knows something about the present that affects the choices for the next scene. It’s the idea that there’s not always a direct correlation between “action” in game terms and “action” in terms of what a character does. Looking at things this way greatly expands the system’s range of options from just describing actions in a kind of alternate physics to a more narrative approach.

Reputation Matters: Both Superman’s devotion to “Truth, Justice, and the American Way” and Batman’s reputation as the “Dark Knight Detective” matter in the story, and can matter in both positive and negative ways. Superman can’t intimidate Copperhead, who knows Supes won’t do anything to hurt anyone, even if he can. The Injustice Gang is afraid of Batman, on the other hand, even when he’s chained up and at their mercy. On the flip-side, however, Batman doesn’t have Superman’s level of trust when it comes to dealing with the public. Even the villains’ reputations come into play: if Humanite weren’t known as a genius who cared about the arts, Batman’s plan to bribe him wouldn’t have worked. This is where mechanics like aspects (FATE), qualities (Icons), or distinctions (Marvel Heroic) can be useful, since they can be both good or bad, depending on the situation (and, often, the player’s choice).

Actions Can Be Complex: Actions—or at least a character’s allocation of actions within a game turn—can sometimes be complex: Superman deflects Grundy’s thrown statue and, in so doing, hits Star Sapphire with half of it. Wonder Woman grabs Shade’s Nightstick, lassos Joker, and hits Shade several times, knocking him out, then starts reeling Joker in when he tosses her an exploding doll. What this suggests is a need for flexibility when it comes to what heroes can choose to do in a given turn; if players are locked into a menu a choices, that may be too limiting.

Next Up: Trouble in Paradise (Island, that is) in “Paradise Lost” — Part 1