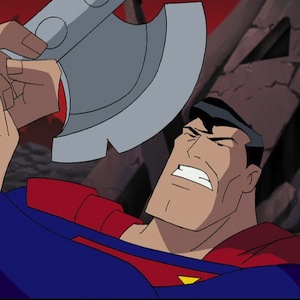 An accident in space leaves Superman and J’onn at the mercy of alien slavers, who sell them to Mongul, the ringmaster of an interstellar bread-and-circuses show called “War World.”

The “teaser” section of this episode could easily be a lead-in to a superhero adventure: an asteroid on a collision course with Earth. It’s a bit of a “bait and switch” scenario: Superman and J’onn think they’re dealing with one crisis, but end up in quite a different one! The asteroid’s unexpected detonation—and the heroes capture by the slavers—is clearly a case of GM fiat to get the ball rolling.

Note the casual matter-of-factness of alien life and civilization in the DC Animated Universe. Superman and J’onn are both aliens, after all (the last Kryptonian and the last Martian) and Green Lantern and Hawkgirl are both “space cops” investigating an unusual crime scene. There’s no ruminating about the whole thing, it’s just presented as part of the world.

The entire scene that establishes Draaga as an honorable and formidable warrior is interesting because it all happens before any of the main characters arrive. It’s another case of a scene intended for the audience rather than players in the roles of main characters. It would be interesting to have a player or players control Draaga (and his opponent) in this scene to give them both a better sense about the character, and a measure of sympathy for him.

J’onn is worse-off than Superman on the alien planet, although both are clearly not at the peak of their abilities, another complication set up by the GM to make this more of a challenge. The same goes for the force field that separates J’onn and Superman. In the Marvel Heroic game, changing the group dynamic is a GM tool, since that dynamic (Solo, Buddy, or Team) as a direct impact on character abilities. Hawkgirl and Green Lantern’s “good cop, bad cop” routine on the way-station planet shows similar dynamics.

In their fight on War World, Superman is initially on the defensive, while Draaga attacks. He tags Supes with a small cut (mostly to establish he’s a threat), then misses. Superman tries to talk him down and nearly gets an axe to the face for his trouble. He blocks, but Draaga punches him, then nails down Superman’s cape with an axe strike before he can slip out of his grasp. When Superman knocks Draaga down, he takes the opportunity to destroy his axe with his heat vision, then he tosses Draaga for a forceful slam. Note that Superman doesn’t at any time just fly off, suggesting there is something off about his powers (that GM-imposed complication again).

Draaga distracts Superman with a thrown attack then charges into him, getting him on the ropes. There’s a pretty savage beat-down until Superman strikes back and knocks Draaga off of him. Draaga starts fighting dirty with a handful of sand to blind his opponent before knocking him down again, but his attempt to crush Superman is thwarted by the Kryptonian’s super-strength, and Draaga ends up pinned under the same slab of rock himself. Of course, when Superman goes to check on Draaga, he gets him again, and the gladiator tries the same tactic, only with an even larger rock. Now it’s Draaga’s turn to get overconfident: No sooner has he declared victory, then Superman bursts out of the rock and takes him down. It’s worth mentioning that Draaga and Superman are clearly very closely matched: each one takes at close to a dozen hits from the other before one of them is out of the fight.

Of course, when ordered to kill the fallen gladiator, Superman refuses, even though Draaga begs for an honorable death. So Mongul orders his robots to destroy the Kryptonian!

Teasers: Sometimes the adventure you think you’re getting is not the one that’s actually happening. If “War World” was a game session, the players might think it was all about deflecting the asteroid, not realizing some of them would be caught up in alien gladiator games! Sometimes this happens by design, with the GM planning the teaser and what follows. Other times, it’s by accident, when a player rolls a critical failure on a check to examine the asteroid for dangerous materials, for example, and the GM has to decide what’s next when it explodes and knocks the characters out.

Social Dynamics: Perhaps more than any other genre, superhero stories are about solos, duos, and teams and those distinctions are important. Heroes often behave differently, both in terms of choices and abilities, in different dynamics and, arguably, solo Batman or Superman are different characters than team Superman or Batman. A game system may want to take this different into account (as Marvel Heroic does) or look for ways to create it with mechanics for teamwork or player cooperation, such as the card-play mechanics of Torg or other team resources players can share.

They Also Serve…: Speaking of which, one can’t help but wonder: Who are the “player characters” in this episode? Is it all four Leaguers, or are J’onn, GL, and Hawkgirl just “stand-ins” for a Superman solo adventure? Certainly, Supes is the focus of the story, but the others do play a role. Does J’onn standing on the sidelines quietly cheering Superman on play a role mechanically? What’s the best way of handling the separate story threads of the Superman/J’onn dilemma and the Hawkgirl/Green Lantern investigation? They might even be entirely separate game sessions “woven” together into one narrative!

Variety is the Spice of Combat: If the fight between Draaga and Superman was just the two of them standing and hitting each other, it would be much less interesting. Instead, there’s give-and-take, with each of them getting the upper hand and using different tactics to gain an advantage. A good system keeps players engaged and always thinking, whether tactically, narratively, or both. D&D 4e is a good example of encouraging players to view encounters as a tactical exercise. Other systems may focus instead of asking players to come up with interesting narrative, aspects, or other ideas to justify a game system advantage.