A new Icons GM inquired: How do I make villains enough of a challenge for the heroes? I put two villains up against them and they each got taken out in one hit!

As said GM noted, Icons is meant to be a fast-paced, fast-playing game, but not necessarily that fast! In general, most characters should be able to take a couple of hits before dropping to 0 Stamina, although the definition of “a couple” can vary with the character and the attack. Still, that’s the reasoning why Stamina for the Average (3) person is 6, enough for two Average attacks.

There are a number of tips and tricks to consider when it comes to helping your Icons bad-guys hang in there a bit longer:

Defense: As they say, the best defense is not being there when the attack lands. Consider how effective your villains are at defending themselves (see Reactions in the Taking Action chapter of Icons). Keep in mind that equal attack and defense levels mean a 58% chance of a marginal success and a 42% chance of a moderate success. Just a 2-level shift in the defender’s favor means a 28% chance of a marginal success and just a 16% chance of a moderate, and only a 2% chance of a major success. Since the heroes have and get Determination Points, there’s nothing wrong with initially putting things a bit in the villains’ favor. Also remember that the Defending action sacrifices a character’s panel for that +2 level shift in defenses.

Regeneration: Like Damage Resistance, Regeneration can allow a villain to recover Stamina more quickly to hang in a fight, especially if they are Defending for a page or two, avoiding getting hit, in order to bounce back.

Trouble: While villains do not have Determination Points like the heroes do, they can gain advantage (and any of its benefits) as trouble for the heroes! That includes a use of the Recover option to regain Stamina. Likewise, villains can also use Maneuvers and Tactics to activate qualities for advantage, including Recover, or Improved Effort for their defense. You don’t just have to use trouble to pump-up the villains, either. It might make a hero’s attack ineffective (Disability), cause a distraction (Challenge) or grant the villain some other advantage. Be creative!

Numbers: Try to pit a roughly even number of equally capable villains against the heroes, a larger number of less capable ones, or a smaller number of more powerful villains. If the bad guys are outnumbered, then they should definitely have some or even all of the advantages on this list to help make up for it! Otherwise, sheer numbers go against them if the heroes can attack, say, two or three times for every one of their panels. An added benefit of making a singular villain much better at evading? They also counter-attack when the heroes miss! (see Evading under Reactions in the Taking Action chapter of Icons) This is the sort of thing that happens when a group of heroes fight a ruthless Fantastic combatant and get their clocks cleaned without their foe even taking any extra panels! 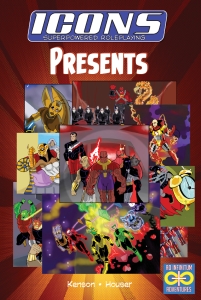 So that’s where you can start. If you want even more options, take a look at some of the material in Icons Presents, particularly the Minions & Masterminds chapter. It looks at minion rival, and mastermind status for villains, complete with special actions and options. One easy one to apply is:

Example: A pair of villains are up against a team of five heroes! The GM divides five by two, getting an odds modifier of 2.5. Therefore, the Game Master increases both villains Stamina by (50% x 2.5) 125% and gives them each Fast Attack (2.5 x 2) 5, sufficient for another Good (5) attack action for each of them.

Other resources from Icons Presents may also be useful, including Fists of Fury, Situational Qualities, Taking Initiative, and Tell Me the Odds.