The folks over at Babies With Knives have produced one of their “Crash Course” videos for Icons Superpowered Roleplaying! So, if you’ve always wanted a quick summary of what Icons is like and how it plays, or if you’re a long-time player looking for a summary to share with new players, check it out, and be sure to give the video a “like” and subscribe to the channel for more “Crash Course” videos and all of the group’s streams! 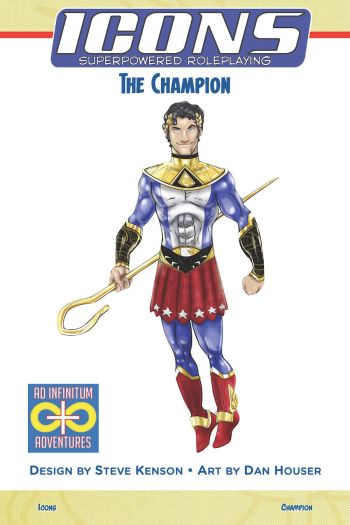 Sometimes, I wish I had the power to help, to answer the call of “save me!” in a real and tangible way. Still, I try to do what I can with what I do have, which includes publishing and imagination.

The ongoing pogrom against LGBTQ people, particularly queer men, in Chechnya has filled me with deep sadness and anger, as has the tepid response of the American government. As much as I would like to be the hero who can swoop in and save people—my people—in desperate need, the best I can do for now is to imagine that hero, breathe life into him, and ask for fellow gamers and superhero fans to donate in order to get to know him better.

So, I give you…The Champion! Chosen by the Aristos Eremenos, bearer of the Four Golden Gifts, protector of the people. All profits from the sales of this short pay-what-you-want PDF will be donated to the Rainbow Railroad, a nonprofit dedicated to doing the real heroic work: Getting people in danger out of harm’s way and to somewhere they can be safe. With persecution of LGBTQ people on the rise around the world, not just in Chechnya, their life-saving work is more important than ever. Whether or not you include the Champion in your heroic universe, please consider offering them your support. Be a hero, because the world needs more. Thank you.

It’s D&D game night, and the characters are trapped by their vile foes, thrown in irons, and imprisoned in the deepest dungeon.

“I want to break my chains!” says the player of the brawny fighter.

Having already made note of the “Manacles” section from chapter 5 of the Player’s Handbook, the DM says, “Roll a Strength check.”

Now what? Does Brawny Fighter get to try again? The section on “Ability Checks” in the Dungeon Master’s Guide—specifically “Multiple Ability Checks”—presents two options:

So, which is this? Neither option is particularly appealing: If the strong character can’t break his chains, he can never succeed? On the other hand, it’s a bit anticlimactic to say that just taking a minute (10 rounds) is enough for him to break the chains automatically. “You can try again later” is a perfectly valid answer from the Dungeon Master—who gets the decide when “later” is—but is there a game-system middle ground for this kind of situation? Turns out there is: inspiration.

Our Hero can’t try to break the chains, or figure out the maze, or overcome the obstacle without a breakthrough, without being inspired. Inspiration draws on your character’s personality traits, the things the character cares about. It represents when your character is truly motivated. It’s also a great benchmark for those times when your character has the gumption to try again, and succeed this time, since the added effect of inspiration is you can now make the roll with advantage!

The best part of acting on inspiration is it is a matter of motivation. In order to get the needed inspiration, players need to look to their characters’ personality traits and play to them. What is going to motivate our brawny fighter to really try to escape? Is it a threat to a loved one, duty to a sword liege, revenge, or simply proving that nothing and no one can hold him prisoner? Likewise, going with advantage as an opportunity to try again encourages the players to pro-actively change the situation, rather than just waiting the appointed time to make another die-roll.

If at first you don’t succeed in your next D&D game, consider acting on inspiration.

Continuing the epic Rise of the Phalanx series, Dan Houser brings you the “event” adventure Nemesis Crisis — usable with Hero Pack 5 for ICONS Superpowered Roleplaying, and now available on DriveThruRPG and RPGNow!

Called to invesitgate a mysterious energy phenomenon, the heroes are whisked away from Earth to the the otherworldly planetoid Equinox, where the Cosmic Justicar pits them against their greatest foes, and the malicious and mysterious master villain known as Reign, with the fate of Earth’s metahuman population at stake!

The Nemesis Crisis present the planetoid Equinox, the aliens inhabiting it, and sample heroes and villains for the adventure, which is also designed for use with the characters from Hero Pack 5.

Can the heroes overcome the cosmic challenges to prove themselves worthy in…The Nemesis Crisis? Get it now for just $5 at DriveThruRPG!

Ad Infinitum Adventures presents Cold War Conundrum, an adventure for ICONS: Superpowered Roleplaying, usable a a stand-alone or as a sequel to the kick-off adventure Flight of the Nova-1.

A threat long thought defeated and locked away rises in the former Soviet Republic of Zyrkistan. The energy being known as Arsenal steals nuclear warheads scheduled for decomissioning with the aid of former Soviet heroes, mercenary villains, and Cold War-era technology, intending to unleash terrible vengeance upon the West! Can the heroes find Arsenal’s hidden base in time to prevent Armageddon?

Cold War Conundrum is part two of the exciting Rise of the Phalanx storyline, also playable as a stand-alone adventure, and features new villains, robot minions, vehicles, and world-spanning action for your team of ICONS heroes!

It’s the end of the first season of Justice League and the conclusion to the epic three-part “The Savage Time” as the time-tossed members of the League have to stop Vandal Savage from interfering with history and prevent the Axis powers from winning World War II.

END_OF_DOCUMENT_TOKEN_TO_BE_REPLACED

The middle part of the conclusion to the first season of Justice League sees the heroes scattered across war-torn Europe in the 1940s, struggling to correct a timeline altered by Vandal Savage.

END_OF_DOCUMENT_TOKEN_TO_BE_REPLACED

The three-part conclusion of Season One of Justice League hits on some great comic book elements, including time travel, World War II, Nazis, and alternate histories, to say nothing of featuring one of DC’s more unusual master-villains, the immortal Vandal Savage, in an action-packed story full of fun Easter eggs for viewers, along with some useful ideas for superhero RPGs.

END_OF_DOCUMENT_TOKEN_TO_BE_REPLACED

This is more of a post-let than a detailed post, but it was an idea that occurred to me and I wanted to get it out there for anyone who might benefit from it or do something interesting with it (which, by the way, is carte blanche for you to do so, if you feel so motivated).

In Fate Accelerated Edition, characters use different Approaches to perform actions, choosing from Careful, Flashy, Forceful, etc. (or whatever other names the Approaches are given).

One classic element of fictional conflicts is encouraging, forcing, or tricking an opponent or rival into using an Approach that puts them at a disadvantage: get a normally careful foe angry enough to attack with abandon, make a somewhat dim-witted rival overestimate his own cleverness, put a forceful, flashy character in a situation where being sneaky and subtle is called for (or vice versa).

Example: Two sword-fighters  are facing-off, and it quickly becomes clear they’re evenly matched in the Quick and Flashy department, so one tries to taunt her opponent with a Flashy maneuver to get him angry enough to try a Forceful attack. On a tie or success, she goads her foe into taking a Forceful approach for the next exchange, perhaps giving her an opening for a Quick attack. If she succeeds with style, her foe is so unhinged, he goes Forceful for the next two exchanges at least.

Addendum: Why is this any better than just creating an advantage or getting a bonus? Apart from the flavor of it, shifting approaches can have a more variable bonus (depending on the spread between the subject’s best and worst approaches applicable to the situation) plus it can potentially deny the target access to stunts based on a particular approach: If your foe’s best stunt is based on being Flashy, for example, and you force him into a situation where he has to be Sneaky, then that stunt is likely off the table for the moment, giving you an added advantage.

Like previous entries in the popular Hero Pack series, this one features dozens of fan-created heroes and villains, by ICONS players for ICONS players, with a twist: characters are paired, hero with arch-nemesis, hero team versus villain team, with three pairs of solo hero/villain enemies and seven pairs of teams (fourteen total) as arch-foes, all ready to use in your ICONS game!

Plus the characters in Hero Pack 5 use the updated power descriptions and formats from the Great Power sourcebook, making it immediately useful with those rules.

Grab a pack of inspiration for your ICONS game with Hero Pack 5! Get it now at DriveThruRPG!